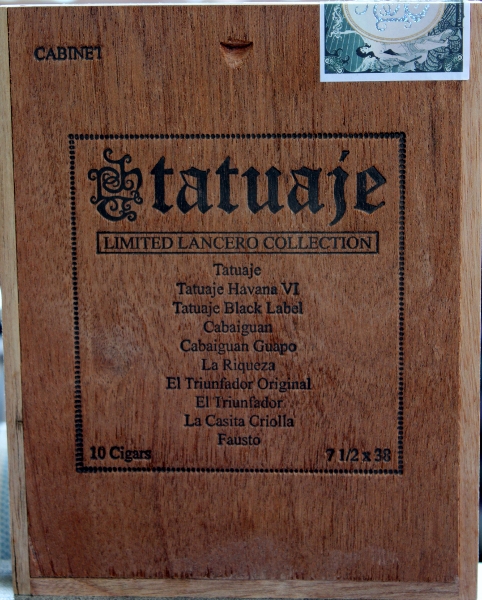 Welcome to this weeks review of the Tatuaje Cabaiguan Guapos Lancero which I got in the 10 count lancero sampler as seen in the above picture. All of these cigars are 7.5×38.

Slight barnyard on wrapper and a peppery chocolate cold draw.

Starting out this Tatuaje Cabaiguan Guapos Lancero with a strong pepper blast and a base woody flavor. Really thought there would be a chocolatey taste per the cold draw but it has not materialized as of yet. Hits a medium strength quickly even as a fruity taste starts to appear. Pepper is still dominate which surprises me. Fruit has turned to a more sour note. Kind of like a sour cherry but covered in chocolate. Not 100% sure it is a chocolate coating but right now it dulls the sour note and that is all I can think of. After further brain activity and tasting it is a caramel coated sour cherry, not chocolate. Keep hoping for the chocolate/cocoa from the cold draw I guess. At the end the fruity taste went away but the sour stayed. Very sour peppery in the little nub, about an inch left. Letting it go at this point because I am not a fan of the sour taste.

Would I buy it again? Yes since this was first but I would try it in different sizes to see if the sour wouldn’t be so strong at the end. If it was the same in other sizes then I would pass on it.