I really lucked out this week. I only just got over a nasty bit of the flu in the past day or so, which doesn’t sound very lucky, but in this case it is. In a few short days, cigar enthusiasts from all around the globe will be packing their suitcases and boarding planes heading for Las Vegas to attend IPCPR, probably the most important annual cigar event there is. I will be a part of that mass migration of lovers of the leaf, and having just gotten over being sick, I’ll be traveling chock-full of nifty germ fighting antibodies. This means I’m virtually guaranteed to be in top physical condition for chain smoking premium stogies. (Or at least I probably won’t catch a cold on the flight there.)

But the luck doesn’t just stop there. I haven’t been smoking cigars for the past 3 or 4 days, but I realized I have have smoking notes and pictures I took weeks ago while Jerry and I were Twittering back and forth about the Tatuaje Cojonu. And looking through our official cigar review index I can see that we haven’t reviewed it yet! (With all the reviews we’ve done, I’m always surprised and a little excited to find a cigar that’s still uncharted territory.)

I had planned to review the Cojonu 2003 that Jerry favors, but when I went poking around in a local shop, I found only the 2006. This too might also be a luck. The most obvious difference between the Cojonu 2003 and the 2006 is the shapes of the cigar. (The blends, of course, differ too.) The 2003 is a toro, while the 2006 is the size of a robusto with the tapered head of a torpedo. And lately I’ve really been digging the vitolas with a tapered head.

So let’s see if my luck ends here, or if the cigar turns out to be a winner. And if it does, watch out Vegas!

The Pre-Smoke
The Cojonu 2006 has a slightly less understated appearance than the most of the other Tatuajes. In addition to the standard brown fleur-de-lis band, this cigar also comes with a second, flashier golden band displaying the name of the cigar.

The cigars’ wrapper was a nice darker natural color with an oily sheen and few veins. I found both cigars to be mostly firm, though one cigar did have a soft spot. I also noticed that one cigar’s wrapper was noticeably lighter in color as it neared the head. The cigar with the soft spot had the additional flaw, a crack near the head that was a bit worrying. The scent of the wrapper was compost that got sweeter and more pungent at the foot. After clipping the cigar with my default cutter, my Xikar scissors, I got smooth chocolaty, fruity flavor in the cold taste.

The Burn
As you might expect the crack and the soft spot were hints of burn problems to come. I found that cigar to have a fairly uneven burn that got a bit wild in the second third. But I wasn’t all that impressed with the burn of the cigar without the visually apparent flaws. Though that cigar’s burn wasn’t quite as wild as the flawed stick, it required so many relightings that I found myself frustrated with the cigar by the end. The wrapper crack I noted earlier turned into a full fledged problem as the cigar entered the final third. The wrapper began to unravel a little bit. It was still smokable, but a bit of a hassle keeping it in place while I smoked. One thing I can’t complain about is the draw. I never had a issue with either cigar.

The Flavor
The Cojonu started creamy and nutty right off the bat. Shortly into the cigar I noted a distinct peppery peanut butter flavor. As the cigar progressed through the first third I also got little pockets of caramel and syrupy flavors, some cinnamon and a little bit of earth.

As the cigar began the second third I the flavors became cocoay and coffee. Leather also appeared as the burn progressed. Nearing the beginning of the final third, the cigar took on a creaminess again that complimented the coffee and leather flavors nicely.

In the final third, the cigar picked up an aromatic, and occasionally sweet cedar flavor. The cocoa and coffee flavors were gone at this point, but the leather remained right up until the end. I also noticed just a bit of cinnamon here and there.

The Price
At $13, this cigar is probably not a cigar most people with smoke on a daily basis. I’m of the opinion that a cigar really has to perform once it crosses that $10 mark if it’s going to be a smoke you’ll revisit. 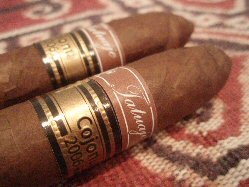 The Verdict
In addition to the two cigars I lit up for this review, I sat down with a third Cojonu 2006 in the cigar shop. Though I didn’t take any notes, I do recall really enjoying the cigar, but being a little disappointed with its uneven burn. I think that experience in the shop does a good job of summarizing my verdict of the cigar. It’s enjoyable, but it has an unpredictable burn that can really take away from the experience. I do think it has some great flavors, and I’ll probably smoke them occasionally in the future, but I just don’t see myself buying them that often. For my money, I see my self reaching for a Serie P almost every time over the Cojonu 2006.

Liked It: Mostly
Buy It Again: Yes, occasionally as the whim strikes
Recommend It: Possibly- it’s worth trying at least once.