The weather here in Southeast Pennsylvania has been a roller-coaster ride, of sorts. One day the sun is shining and the weather is perfect for sitting outside and enjoying a cigar. The next day could be filled with soaking rain. Sometimes we get sheer craziness – last week we had sun, then rain, then sleet, then hail, followed by more sun, all in the same day.

When Sunday rolled around and the forecast called for cloudy but dry skies, I wanted to take advantage of the weather. I laced up a comfortable pair of shoes, grabbed an Amos de Santiago barber pole, and went for a little walk through the woods.

I didn’t get more than 100 yards down the trail when I began to second guess my decision. While it may not have been raining that morning, the woods were soaked. Within minutes my shoes were wet and the water was leaching into my socks. Not wanting to turn back so soon, I decided to tough it out and keep going.

One of the cool things about being in the woods when everything is wet and humid is that the smells tend to drift for quite a ways. For instance, when you get within a few yards of a downed tree you can smell the wood breaking down. It has a distinct aroma that carries – much like damp earth has its own distinct smell.

Anyway, I’m walking along through the woods, smoking my cigar, when I hear something moving around back in the brush. I’ve kicked up deer on numerous occasions and I just assumed one was bedded down and didn’t like me getting too close.

I get a little farther down the trail and a noise on the opposite side grabs my attention. Suddenly a black a white opossum emerges from the brush and goes blasting across the trail, mere feet in front of me. The creature startled me and I nearly dropped my cigar as it went scurrying past.

With the woods buzzing with activity all around me, I continued on down the trail. Puffing on my cigar and letting my thoughts drift as I walked. I came to a portion of the trail that had a fairly steep bank and opted to follow it down to a Y. I went to the right and nature called.

I went down the trail about 50 yards and stepped off to the side to take a quick leak. As I’m zipping up, cigar clinched in my teeth, I hear a strange high pitched whining noise before an animal comes bounding across the trail and stops at the Y.

If I hadn’t of already taken a leak I probably would have pissed myself at the sheer size of this thing. There I was, in shock, staring at an Elk that was damn near six feet tall. It’s head was in the air, as if sniffing something out.

It felt like an eternity that I stood, watching. I didn’t know what to do. I just watched this monster sniffing the air around the path that I had just come down. I got up the nerve to fish my cell phone out of my pocket to snap a quick picture. 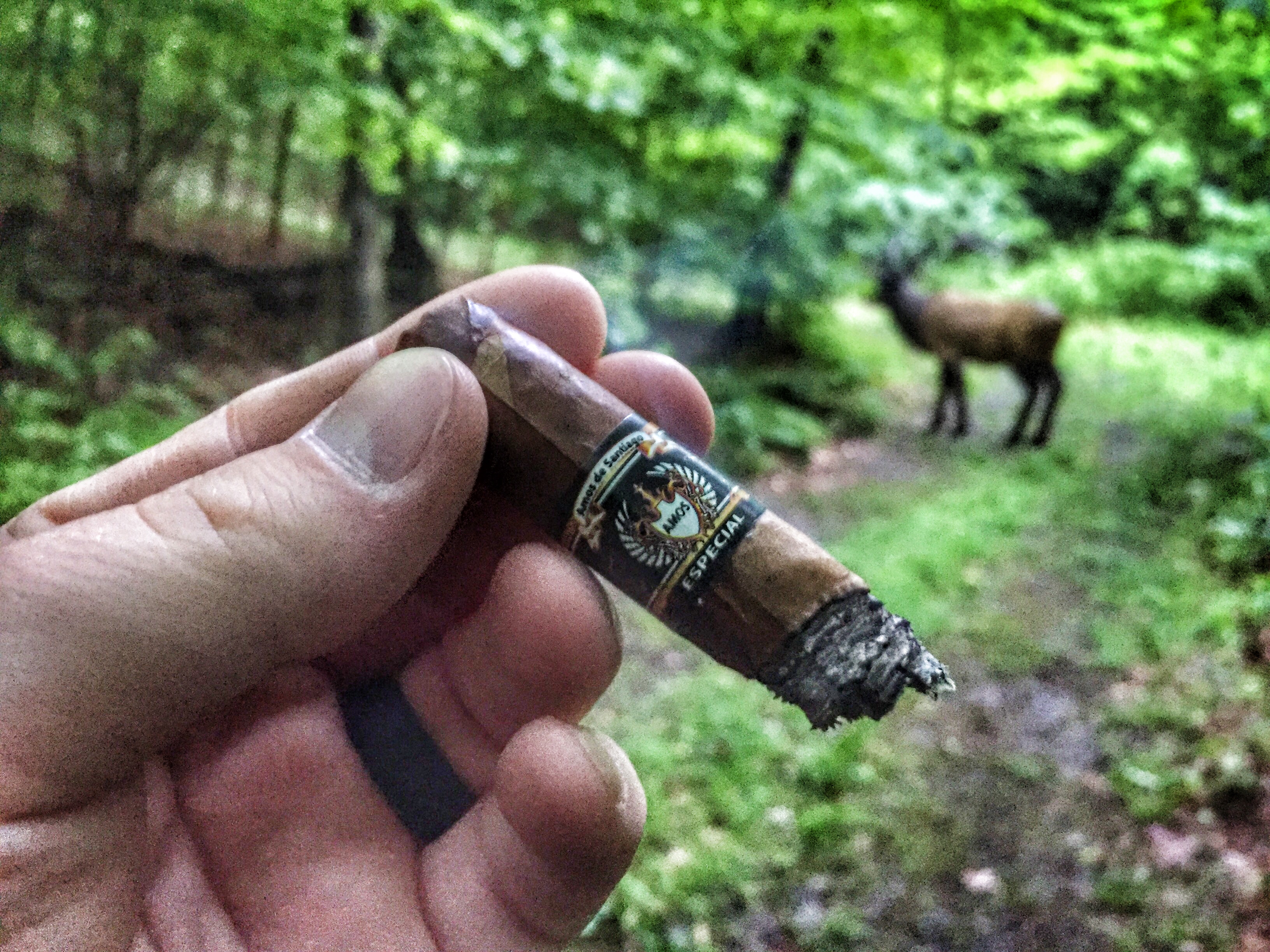 Of course, the stupid shutter sound that the camera app makes got the Elk’s attention and it looked right at me. I froze – heart thudding in my chest. We locked eyes and I felt like I was staring down a giant – this thing had to be seven feet tall.

It took a step towards me and I panicked. I crammed the phone in my pocket, pulled the cigar from between my teeth, and ran like a little girl. The ground was wet under my feet and I slipped, nearly falling, but there was no way I was going down and being gored by an elk.

I heard its hooves clopping on the ground behind me. I glanced back and my pleasant morning walk was turning into a nightmare as a giant animal was coming down the trail after me. I made it up a little rise and could see that the trail opened up into the parking lot beyond. If I could make it to my car maybe this thing wouldn’t gore me – or worse yet, try and mount me…

I hit a slick patch in the trail, slipped, and fell into a patch of brush. A thorn stabbed my hand as I went down and I tossed the cigar away as I tried to scramble back to my feet. What was I doing still holding the cigar? It was a stupid thing to do but I guess I wasn’t thinking in the heat of the moment.

I made it to the mouth of the trail, exhausted, and turned to see if the animal was still following me. It had stopped, standing over the cigar I had tossed in the panic to save my life. The lumbering beast bent down and picked the cigar up in its mouth.

If the whole thing weren’t so terrifying, the animal would have looked majestic. Standing there on the trail with a cigar in its mouth. Towering all but eight feet tall. It gave me a nod as if to say Thanks for the cigar, homie before turning and walking off. I felt like a complete ass – I was wet, muddy, and had a bleeding hand but, in retrospect, it was easily the strangest thing that has ever happened to me while smoking a cigar.

What was the strangest thing that has ever happened to you while smoking a cigar?

7 thoughts on “Even Wild Animals Like a Good Cigar”