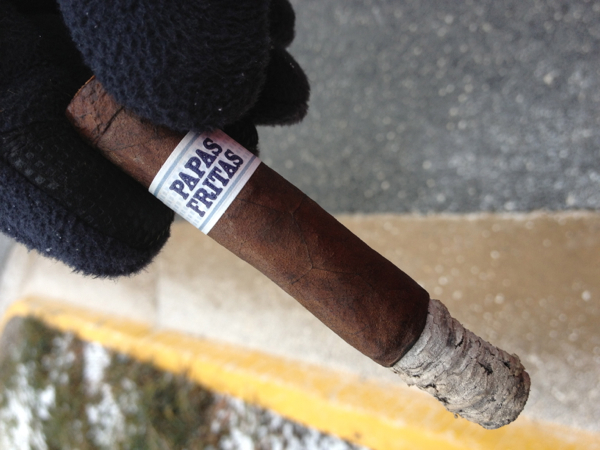 This time of year is always slow for us here at the Stogie Review. The majority of us live in parts of the country where it’s generally too cold to spend an extended period of time outside smoking a large cigar. When you can’t smoke indoors at home, and don’t have the time to make it to a cigar lounge as often as you like, your ability to record video cigar reviews during these cold winter months is rather limited.

Undaunted by 20-degree temperatures and gently falling snow, I was determined to get out there and put together a review video for you all to enjoy. So, I bundled up, grabbed my iPhone, and pulled a Liga Privada Papas Fritas from my office humidor. Knowing that this mixed-filler petit corona would only require about 20 minutes or so to smoke, I ventured out into the unforgiving open air to light up and roll film.

Soundtrack: “Passing Into Legend” by Coruscate
http://ccmixter.org/files/Coruscate/41017
is licensed under a Creative Commons license.

It should come as no surprise that I’m a big fan of the Liga Privada Papas Fritas. After all, I included it in my list of “Cigars to Watch in 2013.” Honestly, I really can’t think of a more ideal quick smoke. I’ll always make sure I’m well-stocked for those frequent occasions when I’m running short on time but want a quick fix of great Liga Privada flavor. If you’re still hung up on the notion of paying six bucks for a short-filler cigar, all I can say it: get over it.