The Tabernacle by Foundation Cigars

December 7, 2017December 2, 2017Reviews by Walt1 Comment on The Tabernacle by Foundation Cigars

Ever since Sir Stogies has become the Gilbertsville Cigar Factory, my Cigar World has been turned upside down. With the flood of new product into the shop, I feel like I’ve been shaken out of my rut. I no longer head directly towards the AJ Fernandez New World and now spend a little time wandering around in the humidor. I’m excited about trying new cigars – its been quite a while since I could say that.

Among the new cigars in the humidor, the one that arrived with the most anticipation from the regulars was The Tabernacle by Foundation Cigars. The common statement that I just kept hearing was “If you like the Drew Estate Liga series, you’ll love the Tabernacle!”

Personally, I think that is a pretty bold statement. The Drew Estate Liga Privada T52 is an amazing cigar with one downside – it is hard to come by and, as a result, commands a hefty price. Could the Tabernacle really compare? 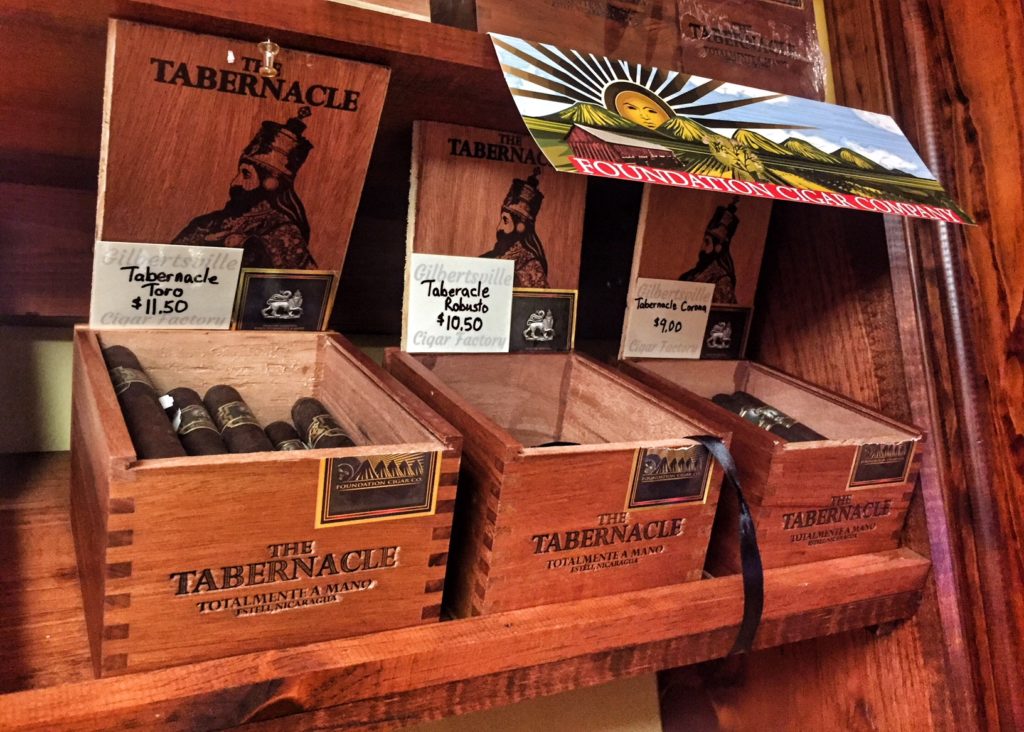 Since Foundation hit the shelves here at the Gilbertsville Cigar Factory, I’ve been no stranger to the brand. I’ve smoked most of the offerings – picking up several of the Tabernacle at this point. In fact, I’m smoking my fourth as I type this review.

At $11.50 for the Toro, this isn’t a cigar that will become one of my go-to smokes – no matter how much I like them, the price point is just too high for that. With that said, I think they make a tremendous from time to time cigar.

Each of the cigars that I have smoked leading up to this review have been consistent. They burn well and don’t require too much attention with a lighter to keep on track. The smoke is dense and plentiful while providing lots of complexity and aroma. The flavor profile is what I’d consider heavy and dark – Leather, Earth, and Pepper are prominent. The finish is rich and lingers for quite a while after each puff. When retrohaled, there is a myriad of spicy components that elevate the cigar from impressive to fantastic.

I’m often asked, “Smoke anything impressive lately?” Lately, I haven’t had a good answer to that question. Between the aforementioned rut the lack of new product coming into the shop, there really hasn’t been much in the way of memorable cigars. The next time I’m asked that question – I can easily say that the Tabernacle is the most impressive cigar I’ve smoked in 2017 and my only regret is that I haven’t smoked them sooner.

One thought on “The Tabernacle by Foundation Cigars”